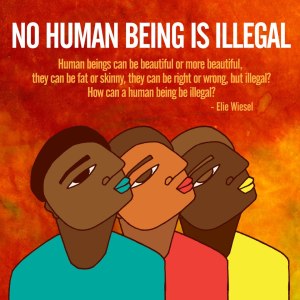 No Human Being is Illegal – artwork by Favianna Rodríguez

Recently I was asked (I prefer to avoid the word ‘commissioned’, it reminds me of the office) to write a new series of poems on migration and human rights, for a music-theatre-sculpture performance to be staged later in the year.

I should admit to myself, whether I like it or not, that any new poems I write on the manifold realities of migration will inevitably be secondary to the Passport I wrote three and half years ago – there was a different energy then, a personal rage much more raw, and hundreds of kilometres of backpacking travel that went into the writing. Still, I accept the new challenge willingly, as I have plenty more to say, I’ve experienced more border troubles and airport interrogations, and heard countless more stories of institutional people-filtering and its breaking of hearts and families. Collaborating with Personne n’est illégal – Luxembourg, and editing the newspaper Le monde n’est pas rond, has also made me more aware of the multiplying absurdities and atrocities created by border regimes. The panorama continues to worsen: a new global apartheid is cementing itself before our eyes, people are being left to drown, or locked away and deported, denied the fundamental right to human dignity and to seek a better, safer life. Many people prefer to shake it all off, hiding their fear and racism behind bureaucratic words such as “illegal”, “irregular”, even “alien”. I was born to migrant parents, and have been a migrant practically all my life. How can I possibly remain silent?

Around a month ago, probably as I was listening to Hadfield’s and Bowie’s Space Oddity on a loop (and I still haven’t tired of it!), I woke from a stomach-wrenching nightmare in which I found myself alone in a rocket, with the words “ILLEGAL ALIEN” printed on my forehead – I was being deported from planet Earth. Talk about paranoia! But the nightmare’s metaphor holds – few things, I imagine, can be more dehumanising and humiliating than deportation.

Based on that nightmare, here’s one of the poems of the new series, entitled No one is illegal. It’s still a work in progress; writing, like breathing and the movement of the heart, is very much a process of expanding and contracting, so the poem is likely to be shortened (or even lengthened) over the coming weeks.

In the mean time – HELP! In part 3 of No one is illegal, I’d like there to be a multilingual cacophony in the background, of words (including insults) used and abused by the media and the general public with regard to migrants. I have plenty of words in English, some in Maltese, French, Spanish and Italian, and I’d like to have more words to choose from in these and other languages. Feel free to send me words in the comments or via e-mail. (Where possible, if in non-Latin scripts, please provide the punctuation!) Heartfelt thanks in advance.

The two other long poems in the series will be less personal – the first, called Invent-a-country, is a lighter, humourous take on nation-state utopia; the second, Sand (Ramel in Maltese), which I began working on a couple of years ago, is a partly multilingual poem tracing the journeys of different people across the Sahara desert and the Mediterranean, based on two true stories. More about those another day.

NO ONE IS ILLEGAL

then a sudden lightness,
a sudden silence,
the splitting of my heart the only sound,

The sunrays piercing through the window
find me in fetal position.

The woman I love sleeps soundly,
her breath ebbing and flowing
like the waves over the rocks
of my faraway village.

Emigrating out of bed,
the cool floor welcomes my feet
and becalms my heart.

I encounter no border guards
on the way to the kitchen.
I let the coffee journey through my veins
and spurt slowly into my thoughts.
At what time of day
do I become a citizen?

I search for the weather map in the newspaper
to recover my bearings.
Clouds straddle land borders,
raindrops fall either side.
What hue of blue is my spirit,
having lived so long away from the sea?

The headlines speak of “spy leaks”,
“unmanned drones”, “illegal immigrants”.
Is the nightmare that just shook me
stored in your state security database?
Can your drones detect the salt-blue atoms
within my DNA?
At what shade of dawn or dusk
does an immigrant become an expat?
If you were to play the musical notation in my fingerprint,
would it be compatible with the national anthem?
Which subparagraph
of which article
of which implementing regulation
gives me the right
to take a deep breath,
to stretch out and yawn,
and to heave a sigh of relief?

I shut my eyes. There they are,
in the redness,
ink-dripping words floating through the air
like hungry mosquitoes.
With each swat of the newspaper,
the louder their buzz in the ears.

No one is legal or illegal!
No paper, no ink, no dirty bureaucratic stamp
can codify the depths of the soul,
the hopes and dreams of the migrant heart!

My family, made up of seven accidental nationalities,
charts its journey through a labyrinth
of forty-nine shifting frontiers
weaving an invisible tapestry
that no customs officer can cut.

Listen. Do you hear the cracking?
The Great Rift Valley continues to widen.
Should we ever return en masse,
there may soon be room for us all.

Hold on a second. Who wants to be ‘regular’ ?
Perfectly symmetrical, perfectly integrated,
perfectly robot, a regular polyhedron,
not a single wild hair, mole, or beauty spot
rising above the skin?
The woman I love, born in Luxembourg to
Argentinian parents of
Turkish-Puglian-Guaraní descent, has a small toe
resting upon the toe next to it,
and I adore the irregularity.

If you believe in the gates of heaven,
pray that you will find them unscrewed from the jambs.

Aliens? From which exo-planet?
Is it visible with the naked eye?
Are they creatures spawned
by another god, or spurted
on an opposite side of the big bang?
Are we in danger of extinction?
Do they breathe in oxygen
and breathe out carbon dioxide,
or are these monsters messing
with the chemical balance of our air?

The scent of alien chemicals
penetrating our paper-thin atmosphere
has spun my head beyond its axis.

The newspaper thrown for recycling,
I walk through the forest
to feel the cool air caress my skin
and cleanse my ears.
My eyes migrate through the foliage,
my thoughts into
and out of myself.

Birds have flown into my heart
with offerings in return for warmth,
and have taken off again as free as they were when they came.

My beard has welcomed tufts of pollen
and I have overflown with contentment
in carrying such fertility, occasionally
stroking them off, occasionally
blowing them on their way.

The drizzle that softens my head
and trickles down my neck,
I sometimes like to catch on my tongue.
Through these same droplets,
microplankton have risen at night
toward the surface of the sea,
and multicoloured fish have spawned.

The winds are more than four
but move as one.
I thirst for the winds to fill my lungs,
I crave they bring salt to my lips.

Human once more, I deport myself softly
back to bed.
The woman I love sleeps
in fetal position.
Migrating into dreamland,
I see the island of Pangaea rising above the ocean.
People of all colours,
each of them perfectly irregular in shape,
are drafting a planetary constitution.
And I am one of the civil servants,
translating into one of over 6,000 official languages:
Article 1 – No human being is illegal,
and it is illegal
to illegalise
a people.