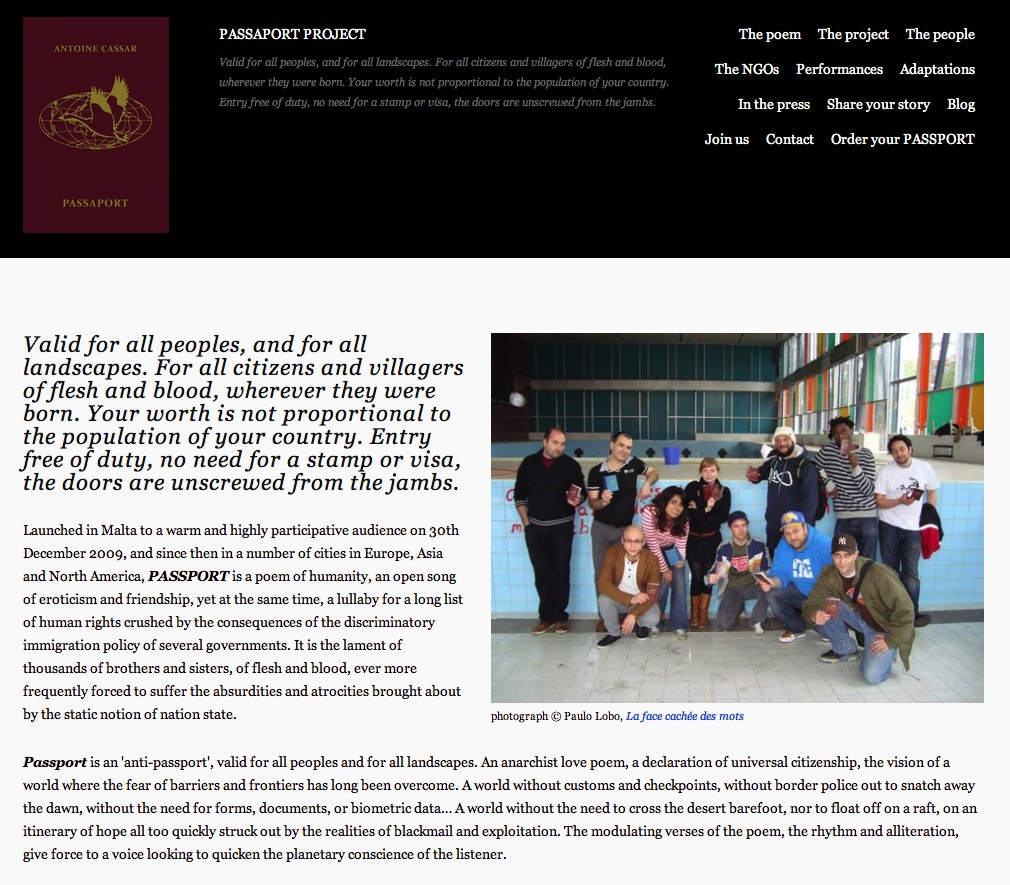 a poem by
Antoine Cassar

Valid for all peoples, and for all landscapes. For all citizens and villagers of flesh and blood, wherever they were born. Your worth is not proportional to the population of your country. Entry free of duty, no need for a stamp or visa, the doors are unscrewed from the jambs.

Launched in Malta to a warm and highly participative audience on 30th December 2009, and subsequently in a number of cities in Europe, Asia and North America (including Rome, Paris, Madrid, Struga/Skopje, Seoul, Hong Kong, New Delhi, Kolkata, Bangalore, and San Francisco), Passport is a poem of humanity, an open song of eroticism and friendship, yet at the same time, a lullaby for a long list of human rights crushed by the consequences of the discriminatory migratory policy of several governments. It is the lament of thousands of brothers and sisters, of flesh and blood, ever more frequently forced to suffer the absurdities and atrocities brought about by the static notion of nation state.

Passport is an anti-passport, valid for all peoples and for all landscapes. A declaration of universal citizenship, the vision of a world where the fear of barriers and frontiers has long been overcome. A world without customs and checkpoints, without border police out to snatch away the dawn, without the need for forms, documents, or biometric data… A world without the need to cross the desert barefoot, nor to float off on a raft, on an itinerary of hope all too quickly struck out by the realities of blackmail and exploitation. The modulating verses of the poem, the alliteration and anaphora, give force to a voice looking to quicken the planetary conscience of the listener.

Solidarity with migrants and refugees

In solidarity with all fellow citizens and villagers of the world who, with or without a passport, do not enjoy the fundamental right to leave or return to their country (Article 13 of the Universal Declaration of Human Rights), nor the fundamental right to request asylum from persecution (Article 14), the event also represents a call for action and participation. At each presentation of the Passport, members of the audience are invited to bring along their passports, or any other form of ID, in order to symbolically ‘renounce’ their nationalities during the recital. All documents are hung from a washing line on stage, and returned by hand at the end of the performance.

If you are a bookseller, an active member of an NGO in the field of migrant rights, or a literary translator interested in joining the Passport project, please write to me at passaportproject at gmail dot com.

Yours
this passport
for all peoples,
with a rainbow flag, and the emblem of a migratory goose encircling the globe,
in all the languages you want, official or dialect,
in ocean blue, or dried blood red, or coal black ready for burning, the choice is yours,
take it where you will, your passage is safe and unobstructed, the door unscrewed from the jambs,
you can enter and leave without fear, there is no one to stop you,
no one to jump you in the queue, or send you to the back, there’s no need to wait,
no one to say Ihre Papiere Bitte!, quickening your heartbeat with the pallour of his finger,
no one to squint or glare at you according to the gross domestic product per capita of the nation you’ve left behind,
no one to brand you stranger, alien, criminal, illegal immigrant, or extra-communautaire, nobody is extra, …

(from the English version of Passport,
adapted by Albert Gatt & Antoine Cassar)
As of November 2012, the Passport poem is available in 8 languages (in order of publication): 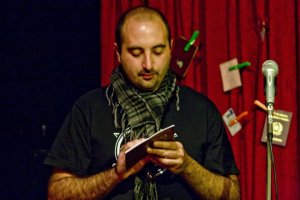 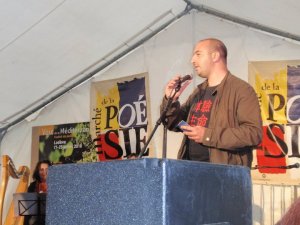 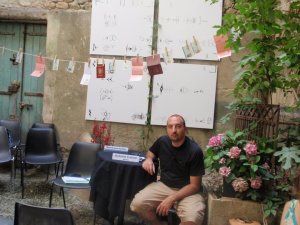 In September 2010, the original Maltese version of Passaport was adapted for the stage by director Éire Stuart, on the occasion of the MADC One Act Play Festival.
The play, the first Maltese-language performance to be staged in the history of the Festival, was awarded Best Production and Best Actress (Marta Vella).
video edit © Éire Stuart
Two short extracts from the Maltese poem Passaport, followed by Macedonian version
Suli-An, Skopje, 30.8.11
(after Struga Poetry Evenings)
Macedonian adapation © Iva Georgieva, recited by Robert Veljanovski 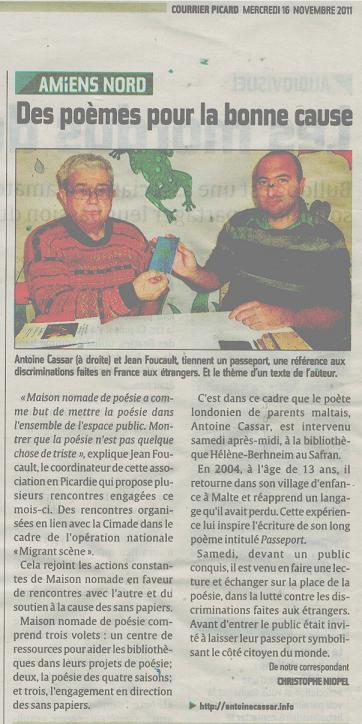 Courrier Picard, 16 novembre 2011
The Passport poem has also been used in schools in Luxembourg, France and Panama.
Loading Comments...
Comment
×