One of these days, when I’m a little more ‘zen’ (i.e. as far as possible from the office), I’d like to write an article about my approach to haiku. A lot of the talk on haiku being “the pure essence” of poetry I find exaggerated, and at times more damaging to the form than beneficial. ‘Concision’ and ‘purity’ (of thought / emotion / meaning) are two very different things. I’ve just referred to the haiku as a ‘form’, but it’s obviously a lot more than a 17-syllable poem; much like the sonnet, I’d venture that the haiku is closer to genre than to mere form, in the sense that it invites and cultivates a certain attitude on the part of both author and reader, a certain way of metaphorically connecting two apparently disparate elements.

As much as the haiku itself, I’m fascinated by haiku translation, particularly from and into Maltese. The challenges, problems, and opportunities for creative adaptation depend very much on the language direction. Going from Maltese into English, I’m often forced to add extra syllables, which sometimes risk ‘explaining’ and ‘diluting’ the original metaphor, and at other times allow a shift in angle. Going from English into Maltese, or worse still, going from either Maltese or English into Spanish, can be mental torture, unless you accept that the translation overflows the 17 syllables, and concentrate instead on re-creating the logical and emotional effect. And of course, once you’ve opened the door to the possibility of overflowing, you may as well accept, in equal measure, the possibility of using less than the required 17 (as a lot of modern haiku in English indeed does – foremost among them, the ‘jazz haiku’ of Jack Kerouac). Again, like the sonnet, the effect of the haiku on the intellect of the reader, and its emotional sway, are a lot more important than the syllable count.

Anyway, I’ll theorise later. I’m not a disciplined haiku writer by any stretch, I go through phases: last year, grounded in bed for a week after a small operation and unable to read or write for long periods, I wrote dozens of haiku in a row; usually, however, the haiku comes spontaneously, often when I’m stressed, and often when I’m driving – as was the case this late, late morning. 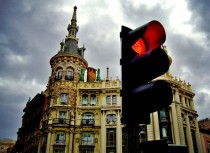 Late for work again,
traffic light conspiracy –
each red as my face.