Slowly but surely, coastline by coastline, island by island, sea by sea, the Atlas project continues to grow. Much too intermittently for my liking, as I’m too active these days to stare at the shapes in maps for longer than a few seconds, but it’s good to rediscover that childhood pleasure now and again. You could call it ‘pareidolic poetry’ if you like, but I’d like to think there’s more to this project than a ludic exercise in Rorschach symbolism: self-expression is not completely absent, and allegory – whether historical, political, environmental or a web of all three – is, I hope, never too obvious and never too obscured, except where necessary. I have long poems on the shapes of the Mediterranean, Africa, the Gaza Strip and the West Bank, and Turkey that need revisiting; I sometimes catch sight of so many forms that the poems describing them become too complicated, perhaps even a little forced. Simplification – the contraction after the expansion – is turning out to be the greatest challenge. I enjoy the writing – finding the right sequence of words and images, the right rhythms, the right sounds – just as much as I enjoy the research, even if reading up on the demography, history and current affairs of each land or sea can at times be overwhelming, even for the tiniest of islands or geographical features.

Yesterday, a lazy Sunday after the success of our Manifestival in solidarity with the people imprisoned in the migrant detention centre, Paula and I finally got round to buying the tickets to Italy to watch Serj Tenkian perform the Elect the Dead and Orca symphonies with the Orchestra Filarmonica Italiana in October. Paula remains a big fan of System Of A Down, and we were both swept away by the power of the Elect the Dead performance in Auckland when I gave her the dvd last Christmas (grazzi tas-suġġeriment, Clifton!), so we’re positively excited to hear it live in a few months’ time. I’m particularly looking forward to hearing the song Borders Are, for obvious reasons, and Empty Walls, but also to listen to Orca, which sounds great on Soundcloud, yet cries out to be experienced live, in the flesh, and off-screen.

Paula and I often watch animal documentaries in the weekends, so we ended up looking for one on orcas – also known as killer whales, though in reality they’re giant dolphins, and are harmless to humans unless in captivity. We found a heart-wrenching BBC documentary on a resident orca population in New Zealand, seriously endangered due to the chemical compounds that pollute the water, foremost among them PCBs that were used as coolant fluids and transformer oils until they were banned in the late 70s. (Not incidentally, 99% of the PCBs used by US industry were manufactured by Mons**** – not only are those bastards colonising agricultural land with their Franken-seeds, they’ve also seriously polluted the oceans.) The orcas, top of the ocean food chain, lap up the most toxic chemicals and store them in their liver and their blubber, and it has been scientifically proven that the extremely high levels of PCBs, PBDEs and DDT (an insecticide entering the sea via agricultural runoff) the orcas have been consuming over the years badly affect their reproduction system. The problem is by no means exclusive to New Zealand; the worst case known is that of the ‘southern resident‘ population of orcas inhabiting the waters of British Columbia and Washington state, in the Northern Pacific, with only 86 individuals left as of 2006. They’re now monitored so closely, that each one has been given a letter, a number, and a name; each individual can be identified by the particular shape of its dorsal fin. Many of them are available for “virtual adoption”, via whalemuseum.org, to help finance the conservation program.

Yesterday’s readings and searches took me, quite accidentally, to a place called Orcas Island, the largest of the San Juan Islands, off the north-western corner of Washington state. I’m just as interested in toponomy as I am in topography, so the name intrigued me immensely: it’s actually pronounced like Orcus, the Roman god of the underworld, not like the plural orcas; it’s not named after the animal, but is short for Horcasitas, the name of a Mexican viceroy who sent an expedition there in 1791; more importantly, the island is not shaped like an orca – except very slightly, by the tail and the arched back, and perhaps the pectoral fins -, but it does take on some very interesting shapes from all four cardinal directions. It is certain, however, that the “southern resident” orca population visit the island often. I decided to write about the island anyway, as an allegory of the orca’s predicament. My Sunday evening was not so lazy after all.

I’d like to say that I write the Atlas poems in Maltese, but it wouldn’t be completely true. There’s plenty of encyclopaedic knowledge out there in Maltese (friends of mine are doing a lot of voluntary work on the Maltese Wikipedija), though the subjects are generally limited to Maltese reality, and barely stretch beyond Europe and the Mediterranean. As most of my reading and research is inevitably done in English (though sometimes also in French and Spanish), a lot of the words that form the key vocabulary of the poems are in English too. Images tend to come to me in Maltese, so essentially, I end up constantly translating between the two whilst writing; it takes me longer, but that translation as part of the writing process improves both versions, to such an extent that both can be considered as equal originals. There are also small divergences between them, to escape lexical ambiguities or unwanted references, or simply for felicity of sound, or to avoid cacophony (to give just one example, the word ragħwa in the last line means foam, but I preferred surf in the English to avoid the clumsy rhyme of “gramophone drowning in the foam“, even if the graphic reference to the image of the blubber oozing toward the shore may have been partly lost).

Orcas Island is half the size of Malta, yet its Atlas poem is roughly the same length as Four Rocks / Erba’ Blatiet. Should I worry about proportion according to surface area? Should the poetic Atlas be to scale? I don’t see why it should, but this is a question I won’t be able to avoid for much longer. In any case, there is much more to be said about the shape of Malta. Speaking of whales (well, of dolphins mistaken for whales), the main island is not only shaped like a fish stuck in its own net, but also like a whale, as the one Jonah stayed inside for three days and three nights, until he plucked up the courage to be what he was destined to become… More about Malta’s ‘Jonah complex’ another day. Here’s the Orcas Island poem, in English first, with the Maltese below.

Orcas Island, from the south – saddlebags, a peruke?

Orcas Island, from the west – a tulip, a gramophone? 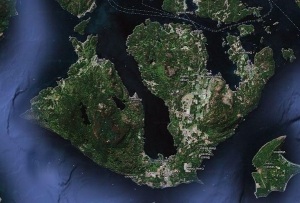 Orcas Island, from the north – a clam?

Orcas Island, from the east – a long-faced Indian chief?

Opening clam, wilting tulip,
saddlebags heavy with rocks,
peruke left behind by a viceroy, torn
by the Pacific winds,
rugged Chowitsuit, long-faced
chief of the Lummi tribe,
compelled to sign a resettlement
treaty at Point Elliott
with a horse foot down his throat.

Orcas Island, not pronounced,
not named, not shaped
for the dark dolphin —
unless stranded on the sand,
dessicating, split into two
by a blunt harpoon,
her blubber spluttering out
slowly toward the shore.

Grandmother orca, old as a turtle
and just as perfectly arched,
her flukes gnawed at by the deer
at Massacre Bay,
her dorsal fin reduced to a thorn,
her pectoral fins too dead
to reach for the rockfish
at Obstruction Island,
her blubber soaked in
transformer oil, flame
retardant, insecticide,
PCB, PBDE, DDT,
the alphabet soup of the ocean,
swallowed one toxic Chinook
salmon at a time
by the apex predator,
until the ruler of the undersea
sought the refuge of the beach
to rest her flaming liver
and rot in peace.

Racing up Eastsound,
the last pod of orcas
arrives in parade
to pay their respects to the matriarch,
transmitting sonar messages
mute and agape
as the gramophone drowning in the surf.