Robben Island. In the background, Cape Town, Table Mountain, and the Cape Peninsula.

For the past ten days, I haven’t been living where I’m living. I searched for Robben Island on the map, and I’ve been absorbed ever since. Area 5.07 km², pretty much flat, 12 km north-north-west of Cape Town in Table Bay. Roughly oval in shape, yet at first, I found it difficult to describe, from any of the four cardinal viewpoints. I began to read voraciously. The climate, between Mediterranean and sub-Antarctic, and extremely windy. The wildlife – the seals that gave the island its name; the colony of African penguins that were almost completely exterminated by 1800; the rabbits released by Dutch settlers to provide ready meat for passing sailors, and which according to one account of 1958, had reached such a high Fibonacci number that they practically stripped the island of all vegetation. 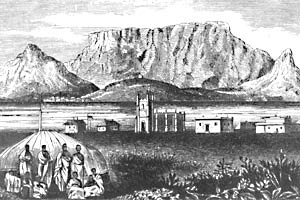 Xhosa chiefs imprisoned at Robben Island in the 19th century. (Wangermann engraving from 1868 in the South African Library/Robben Island Museum)

More importantly for the Atlas poems, the history of the peoples that passed through the island, for a short stay or for decades, if not forever. Shipwrecks lined up in Rangatira Bay. A 600-strong leper colony. The first prisoner, Autshumato, known to the Dutch as Harry die Strandloper (‘the beachcomber’, in reference to his Khoisan tribe), after they had used him as an interpreter in the mid-17th century. A hundred years later, Sayed Abdurahman Moturu, one of Cape Town’s first imams, was also exiled to the island; a commemorative shrine was built for him there in 1969. Later, during the fifth Xhosa War in 1819, the British colonial government sentenced African leader Makanda Nxele to life imprisonment on the island; he managed to escape and swim to the continent, only to drown metres before reaching the shore.

Then of course, there was the maximum security prison for political prisoners, operative from 1961 to 1991. You’ll find dozens of documentaries about it. I watched far too many; they began to repeat themselves, and at times contradict each other. The list of apartheid opponents confined to the island is very long. Today, thousands flock every year to see the prison museum, in particular cell number 5. I’d love to visit one day, though judging by the footage I saw online, I fear I’ll be disappointed by its all-too-sensational presentation. I’ll let the poem below tell the rest. Beyond the homage to Mandela and fellow prisoners – their ‘scholarly’ resistance is a fascinating story -, it’s also a tribute to the people who are still waiting, still imprisoned in that more ‘informal’ yet glaringly visible order of social and economic apartheid, that persists after the demise of the political one.

English adaptation first, Maltese original given afterwards. The place names and souvenirs mentioned in the final part exist in reality. As does Afrika Moni, the admirable, enterprising tour guide at the ImiZamo Yethu township. There are dozens of articles online about his work and commitment to the community. I hope he doesn’t mind me borrowing his name. Superstar Mandela is not the only hero in this long, as yet unended story.

(Thanks to my good friend and fellow Maltese poet Clifton Azzopardi for the short Rorschach session and ideas, and to the members of Kelmet il-Malti for the discussion on a number of Maltese words.) 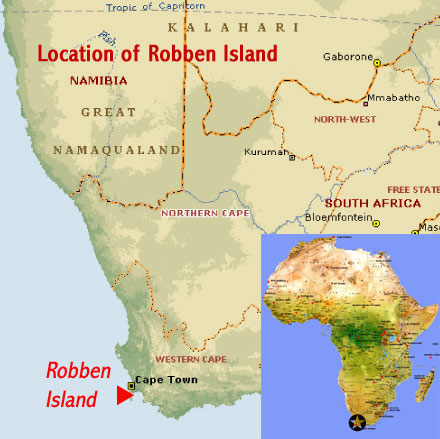 Droplet of mud tossed
off the chin of the rhinocerous,
after he awoke to find his long horn
had been hacked off.
Yellow-green husk
launched from amid the branches
of the giant baobab,
rinsed in the shivering surf
of the Benguela current.
Gold nugget that rolled
off the edge of Table Mountain,
where the lion and the devil
face each other at breakfast.

Robbeneiland, island of seals –
or from the Bloubergstrand beach,
the head of a single seal,
resting on the sand.
From under the military beret,
the seal keeps an eye
on the Antarctic squall,
waiting for the right moment
to make a move and slither its way
back beneath the surge. Patience.

From the Cape Town harbour,
a standing rabbit, with wilted
ears, starting to feel hungry
after having sheared with her teeth
the very last blade of grass
off the face of the island.
Chewing at the salty air,
she twitches her nostrils,
and gapes at the patches of green
on the continent across the bay. Patience.

From the open ocean, a Dutch
klomp, firm upon the froth,
with a hole above the big toe,
or an ostrich crouched in the mist,
lying low, with no idea
where her head is, let alone her neck,
believing her plumes are invisible.
Clinging to the rock, the shell
of a Midas Ear abalone, mother-of-pearl,
slightly chipped, eavesdropping
the gusts from beneath. Patience.

From Matroos Bay, to the north,
the convict, head well-screwed
upon the neck, gazes between the bars
of the limestone cell.
The currents of his heart
rising and falling with the waves,
the inmate remains composed,
serene, chin up –
he knows that behind the wall
there’s the world ocean,
he knows that opposite the island
a game of chess continues
on Table Mountain,
he knows that between Signal Hill
and the Cape of Good Hope
there’s the mermaid Mamlambo
on the look-out upon the cliff. Patience.

Autshumato, native interpreter,
Makhanda Nxele, Xhosa prophet,
Dennis Brutus, ‘coloured’ poet
of Dutch-Malay-Khoisan lineage,
Rolihlahla, the one who pulled at
the baobab branch like a sling to
send the husk flying,
446/64, Isolation Section B,
cell number 5, diet scale F,
no bread for the prisoners
from the Bantustans, cursed
children of Ham,
one letter every six months,
maximum 500 words,
18 years of patience,
a blotch on the map
of the palm of his hand, roughened
by the pounding of the pickaxe.

Memories of when he worked
as a night watchman
at a gold mine in Johannesburg –
1941, twenty-three years old,
with a whistle, flashlight and club,
“BEWARE – NATIVES
CROSSING HERE”,
verifying the Dompass,
a brown passport,
of any native who dared
to approach the gate. Patience.

Robben Island, isle of no comfort,
thumbprint, link of a chain,
a tick biting at the skin,
a chunk chipped off the rock
struck only for the sake of killing time,
the tear that the prisoner’s eye
can no longer shed
after the tear ducts clogged up
with limestone dust.

Patience. We’ll turn this prison
into a clandestine school,
the University of Robben Island –
we’ll teach each other to read
by scrawling letters in the limestone dust,
we’ll study crumpled papers
in the toilet cubicles,
with a football league we’ll prepare
the administration of tomorrow,
we’ll deepen our roots
in the soil of our country
from outside the continent.

Patience. The great gale
will come, be it Bergwind
or Cape Doctor, the abalone
will be blown off the rock
to reveal a marbled palette,
where the mermaid Mamlambo
will dip the brush of her tail
to layer seven colours
across the baobab trunk.

In the shade of the baobab,
under the new rainbow,
opposite the island, amid
Mamlambo’s serpentine braids,
a swarm of tourists
desperate for memorabilia.

At Nelson Mandela Gateway
silver-plated coins,
with Robben Island in relief
and the bust of Rolihlahla.
At the end of Nelson Mandela Boulevard,
in the Central Business District,
rare 5 Rand coins
with Tata’s smile
from ear to ear
selling for 100,000 Rand.
At Mandela Place Hotel & Spa,
a mining company advert:
a solid gold replica
of Madiba’s right hand
waving to the crowd,
the entire map, down to the last
crease of his palm, waiting
for an auction bid. Patience.

On the other side of Table
Mountain, in the mermaid’s bosom,
at ImiZamo Yethu, known also
by the name Mandela Park Township,
the guided tour is on.
On the corner of S Biko Street
and N R Mandela Road,
a litter of barefoot children
with a handful of stones they gathered
from the Disa River,
painted with Rolihlahla’s face,
Hamba Kahle Madiba, Dankie Tata,
Long Walk to Freedom,
waiting for a buyer to appear
among the travellers from Europe.

Meanwhile, Afrika Moni,
the tour guide who dreams
of one day becoming a journalist,
with a calm smile, turns his head
and gazes between the wire poles,
northward, toward the edge of Table
Mountain, under a cloth of cloud,
and does his best to go on smiling,
lest he reveal to his guests
that he may soon begin
to lose his patience. 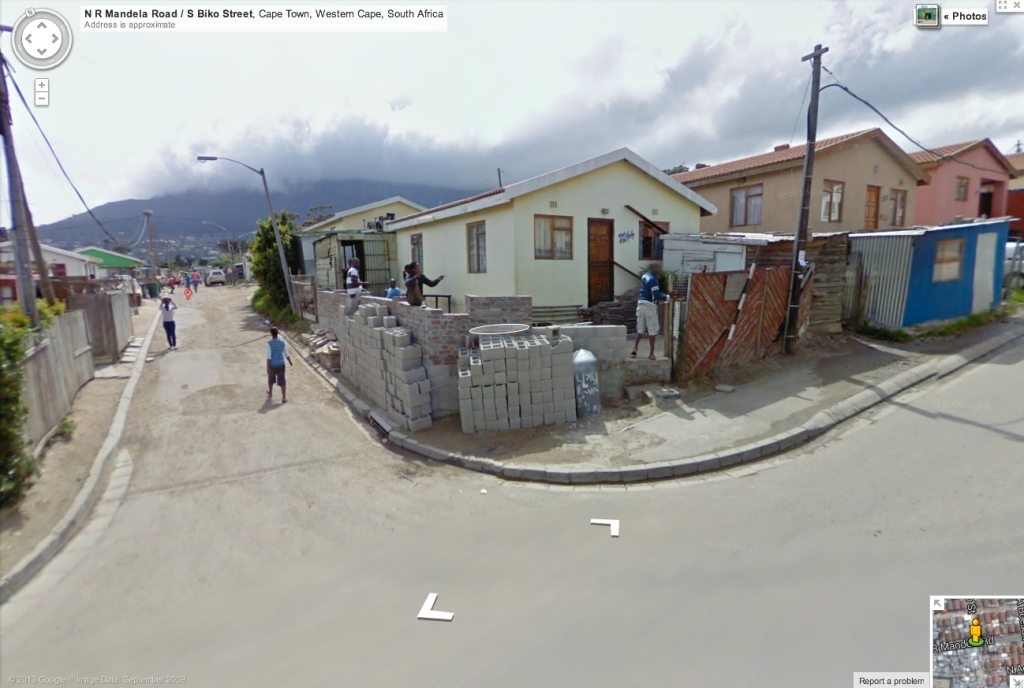